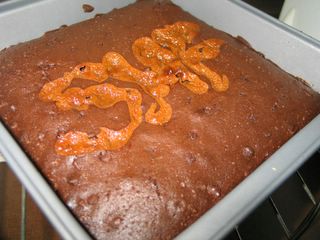 It's here again. This month, Debbie, is the kind host of the event and has chosen caramel as the key ingredient. It was as if Debbie knew that I wanted to get rid of the leftover caramel I made awhile back. I can't remember exactly how I made up that batch, but I do know I melted a pack of store-bought caramel candy with heavy cream, milk and butter. Quite decadent!

I struggled on deciding what dessert to make. The common combination of bananas and caramel is good but I am not a big fan of that yellow mushy fruit. I wanted to do a sweet crepe, but one would have to eat them hot and none of my family members were going to be there and ready to devour my masterpiece. After googling around, several recipes for chewy oat bars came up, sounding oh-so-delicious. But alas! Sadly, anything that sounds remotely healthy does not sit well with my colleagues and friends at all.

So the play-safe me, decided on a cake-type of recipe. Layers of Love Chocolate Brownies , courtesy of the Nestle folks, sounded too good enough to give it a go. Plus, the easy prep was an additional push-factor. I had some doubts though, as an initial thought was that the middle layer of caramel would not show through properly, justifying the theme of the event. But one look at the posted picture on the right hand side of the webpage tossed whatever doubt I had aside instantly. Not only did the caramel show brilliantly, the inside layer was also packed with other goodies like white chocolate chips and nuts. I was almost drooling over my laptop! 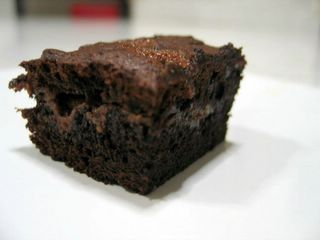 But obviously, comparing my own creation (above) and Nestle's, one can witness the drastic difference. If you sqint hard enough at mine, you can see a lighter shade layer in the middle. Saw it? Try harder. Yep, that's the caramel. The little holes were caused by the white chocolate chips I suppose. I did make some amendments to the recipe, choosing to obmit the pecans because a colleague of mine is not fond of them. Also, I was not generous with the white chocolate chips as suggested, because I ran out. Yep, I am a spontaneous type of kitchen girl. So my middle layer was not as substantial as Nestle's. But perhaps it was also because my caramel was slightly on the dark side so the contrast between the chocolate cake layer and the middle caramel-white chocolate layer did not turn out too well.

Using whatever leftover caramel, I decided to scrawl "SHF" on top, just for kicks. The words showed up nicely and I thought it would be fun to post it up! Taste-wise, those portions turned out with a nice, crispy and chewy feel to them. On the whole, this recipe did not fail, although I could not really detect distinct caramel. Maybe I should have doubled the amount called for. The white chocolate chips went well with the caramel. Obmitting the nuts could have been a mistake. A few bits of crunch would have added more texture to the overall mouthfeel. And where's the ice cream when I want some? Surprisingly, the brownie was not as sweet as I predicted and went down excellent with my cup of hot tea. What a life! Freshly baked and decadent chocolate-caramel brownie for a satisfying late night supper. This was a good brownie, not the best I've had, but good enough to justify the little work that was required.

Robyn said…
Mmmmm! I love these brownies! This has been such a fun event. It makes me want to try every recipe!
10:35 AM

M. said…
Update: My colleagues and J, all thought the brownies were fabulous! The cake remained moist and slightly soft and chewy the following day. In view of all the rave reviews, I will probably make these again!
10:29 PM

Jennifer said…
How much better can chocolate brownies get? You sure have upped the ante with this recipe...I think I might have to try it out sometime soon! Thanks so much!
8:24 AM

Carolyn said…
brownies are always good and the addition of caramel--even better!
4:52 AM