Dine and Dish no. 3 - Introducing the Freshies @ La Braceria

July 12, 2005
Dine and Dish - this is yet another food-blogging event organised by Sarah from The Delicious Life. (Check out her blog! I do cuz it's really informative and delicious!) Though the event is already into its 3rd edition, this is my first time joining. How apt! Here I am, a freshie to Dine and Dish, which coincidentally is themed "The Freshman" this time round! 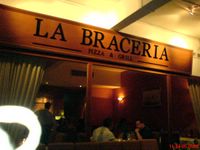 La Braceria is less than a year old but this visit was not my first. In fact, it was my 3rd visit (!!), which also coincides with the edition of this event. Since Sarah has kindly allowed us to interpret the theme as we like, I have chosen to try new items and introduce those freshies to fellow food-bloggers :)

Since La Braceria was a pizza and grill place, we had pizza and grill on both previous visits. This time round, J still stuck to their grill and decided to try their famous homemade sausages. But for me, I wanted to take this opportunity to try beyond their specialities and just to try other items off their menu. With that thought, I decided to go for 2 appetizers instead.

We started with complimentary bread and a balsamic & olive oil dip. The bread, (perhaps it was ciabatta?) was definitely of better quality than the crusty, mass-produced-tasting-sort of white french loaf normally served. Though plain and nothing extra-ordinary, the spongy texture was the perfect vehicle to devour the olive oil dip. Yum! 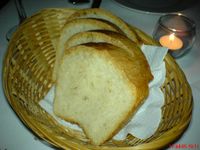 The picture below shows the marinated tuna, Italian style, served atop a bed of fresh mixed greens. The server explained that a vinegrette dressing had been poured liberally on top of the tuna and freshly ground pepper speckled all over. The sourish dressing took some getting used to. But I suppose it was a good compliment to the thinly-sliced tuna, just barely cooked by the acidic dressing. The greens, slightly bitter from the addition of arugula, went well with the fish and the addition of sliced red onions introduced a nice pungency. 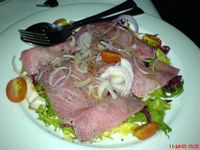 Ok I made a mistake. The sauteed mixed funghi with balsamic vingrette was not my first time ordering it. But, but, (anything to redeem myself here), this time round, they used bigger pieces of mushrooms (brown and portebello) instead of the thinly sliced (white button mushrooms) the last time. I suppose I was lucky that those better mushrooms were available this time. Served on some shredded romaine lettuce and red cabbage, the funghi were delicious juicy and perfect on bread. Waiter, could we have more bread please? 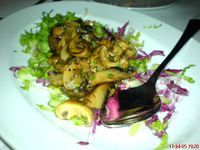 J's sausages came next. Man! My first thought was, "Can someone say food porn now?" What greeted us were two, huge and long sausages, nicely browned on the grill and served with a few thickly sliced potatos and small side salad. According to J, the meat inside tasted firm and not too fatty but there were still bits of gristle. Though it would not be something J would drive all the way to the end of the world for, but it was comforting to know those sausages were homemade and as such, the quality of the meat should be better. 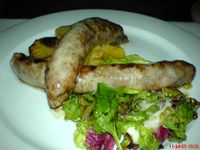 Finally to end our dinner on a sweet note, we ordered the lava cake, highly recommended by my pal. This was basically a molten chocolate cake, flambed with orange marnier at our table. You can't really see the blue flame from the picture but I was really taking it as the ramekin was burning. The server could be more generous with the liquor, because bites with orange marnier just tasted better than the plain chocolate ones beyond the top. The molten center had a rather mousse-like consistency, instead of what I'd prefer, silky from purely molten chocolate. That led to my conclusion that the restaurant used more cream/butter instead of high-quality chocolate, as they should rightly do so (in my opinion). Lastly, parts of the dessert, mainly at the center-bottom, was still cold, probably due to uneven heating. But any longer in the oven, the entire cake would no longer be molten in the middle, and the cake crust was already slightly thick for my own liking. Having said all the above, I have to admit I have really high standards for warm chocolate cake, since I personally went through a few experiments. To be fair, J still thought the lava cake was good, but I know I can do better. 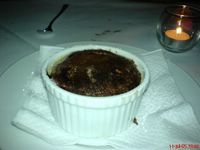 Anonymous said…
hiya mia! thanks so much for playing in dine and dish! isn't it fun? ;) look for the summary some time in the next day or so....

and i like how you carried the theme all the way through. very thorough!
4:13 PM

M. said…
Thanks! I had tons of fun again! I mean, what could be a better excuse to eat out than for the sake of food blogging?
11:57 AM