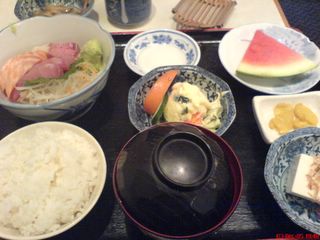 To be honest, I did not intend to participate in this episode of Dine and Dish because being Asian myself, I did not find the theme too exciting. Having said that, I did have a couple of excellent Asian meals over the weekend and because I want to review and rave about it, (perhaps an attempt to relive those moments of sheer pleasure?), I thought of killing two birds with one blog stone.

Japanese is my favorite Asian cuisine. Like many other cuisines, there is the “fine” and there is the “rustic or what I like to call “home-style”. But either way, there is an emphasis on using fresh ingredients and simple preparations to allow them to shine individually. Over the last weekend, I visited a restaurant in each category – Akane for the former, and Minoru for the latter – and both excellent.

I shall begin with Minoru, since I had dinner there first. The restaurant had been on my to-try list for a long time since other foodies highly recommended it. The location was the only show-stopper but anyhow, I found myself there and was transported to Japan’s back alleys occupied with little eateries for a couple of hours while we were there.

To my surprise, the quiet shopping complex houses not just Minoru, but two other Japanese restaurants. I wonder if there is sufficient traffic to maintain business. Anyhow, Minoru was tucked behind and was a non-pretentious restaurant. Once you pass through the typical Japanese two-piece-cloth doors, you find the décor kept simple – a counter bar and a few tables. You just cannot help but be comfortable. There were the usual posters typical of a home-style Japanese restaurant – some of them are calendars cum intro 101 to sushi, mostly beer ads showing a bikini-clad girl holding a bottle. Minoru also stocks a variety of Japanese reading material like magazines and comics for browsing.

We were served green tea and an appetizer which looked nasty at first sight but tasted otherwise. It was a braised salmon fishhead, deepfried first before slow-braising, such that the bones disintegrated without much fight when I bit into them. Browsing through the extensive menu, I was again in a dilemma since my eyes got bigger than my stomach. I had a hankering for tempura but yet, I would rather judge a Japanese restaurant by their sashimi. Finally I decided that tempura would not do good to my sore throat so I settled on the sashimi set (picture above) (S$18).

The sashimi comprised of fresh-tasting slices of sake(3), maguro(3) and hamachi(2). The slices were not cut evenly and I found it disturbing. Somehow, I thought a good chef should at least be able to cut things of even thickness. The maguro, while fresh, was rather bland and grainy. I wonder if it could be because the fillet had been cut in a wrong direction but in any case, I was left with a piece of fiberous and stringy thing after going through a slice. On the other hand, the hamachi was excellent! The flesh was soft yet supple and tasted of the sea. I truly enjoyed it with a little bit of wasabi and dip in soy sauce. The sake was the neutral party; good but non-memorable. Completing the set was a potato salad, a cold tofu, pickles, an excellent miso seaweed soup and a slice of watermelon. I was a very full and satisfied girl at the end of this meal.

Minoru proved that one can get quality Japanese fare for good value. There tons of other food I would love to try (nabeudon, tempura, sushi etc) and I would definitely be back again. Sadly not often I reckon, because I am just not a west-coast girl.