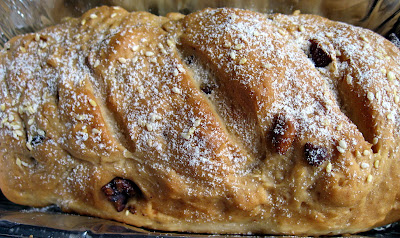 It's true. All it took was that box of instant dry yeast that suddenly appeared on the counter to prompt me to bake bread. The erratic weather that see-saw'd between a clear sky and a pouring rain was keeping me indoors anyway and I had time to kill.

I decided on a walnut bread recipe taken from King Arthur Flour's website. I learnt about this established flour company when I was studying in the US. The ingredients were minimal and I love the sound of walnuts and honey!

As I was taking the steps through, I was telling myself not to have high expectations of the end result. It is not that I have no confidence in the recipe (otherwise I wouldn't have used it in the first place) but rather, my experiences with bread have always taken a "hit-and-miss" route.

But my confidence did pick up a little when the first round of proofing took only about an hour before the dough doubled in size. I punched it down with great excitement and kneaded in the nut mixture. Because I am such a 'nutty' person, I used all the different nuts I had in the house (instead of just walnuts) and got 4 varieties - walnut, almond, pine and hazelnut.

After the second rise that took about 35 minutes, I slashed the tops and sprinkled flour and then sesame seeds. As the bread was baking, the anticipation for great results built up together with the intensity of the smell. Finally, when the bread was done and cooled down enough, I cut it up and was really pleased! It was a good bread all around. Starting with the texture - crust was not overly thick and hard, the innard crumbs were small, uniformly airy and soft. The explosion of scents that fought to overwhelm one another but finally achieved an equilibrium - the olive oil, the yeast. The taste was a slight sweetness from the honey, and the soft fluffy innards cushioned the rich, buttery taste of nuts. I loved it! This is definitely my best bread in a looong while and I did a little jiggly dance around the kitchen. 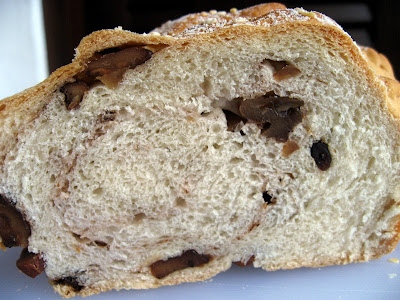 Honey Walnut Bread
(makes 2 small loaves)
3 cups (375g) of bread flour
1/2 packet of instant dry yeast (11g/pack)
3/4 cup warm water
2 tbsp olive oil
4 tbsp honey
1/2 tsp salt
4 oz walnuts, chopped coarsely and pre-toasted
Method
Mix the yeast with flour, then add water.
Stir water into the flour to incorporate.
Then add olive oil, honey and salt.
Continue to stir the mixture until the loose flour are gone.
Dump the dough bits onto a floured working surface.
Knead with all your might until a smooth, satin looking ball of dough appears.
(I took about 15 minutes to achieve by hand)
In a large bowl, add in 1 tbsp of oil.
Place the dough into the bowl and turn it all around to coat it with oil to prevent sticking.
Cover the bowl with a plastic cling wrap. Leave it to rise in a warm place until double in size.
(mine took about 1 hour)
Punch down and on your floured working surface, knead in the walnuts.
Then you could either divide it into 2 (for 4x8 loaves), or into 12 (bread rolls).
Scatter cornmeal onto your baking sheet (I used greased parchment paper) before placing the formed bread rolls/loaves.
Cover with a damp tea towel for 2nd rise.
Meanwhile preheat oven to 170C.
When bread has risen a 2nd time (mine took 35 mins), slash the top of the bread with a serrated knife, about 1" deep.
Sprinkle flour on the top and then bake for about 35 - 45 minutes.
Bread is done when they look brown and the bottom of the loaf sounds hollow when you tap it.